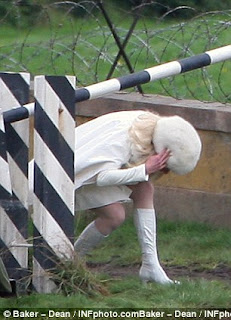 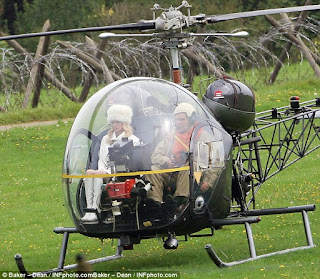 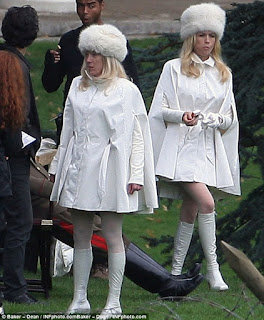 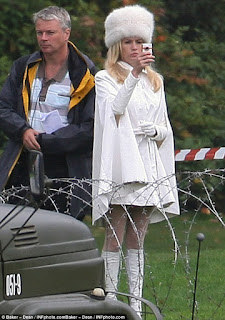 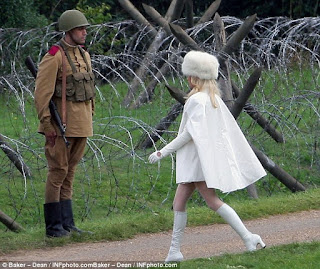 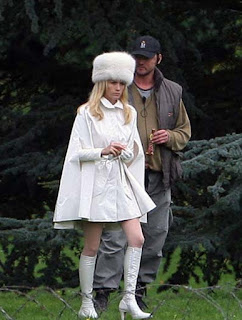 A retrospective on Mad Men

I suppose it's time to speak to the cultural phenomenon that was Mad Men.  Over the course of the show, more women showed up in go-go boot than I was expecting, given the serious nature and often somber tone of the show (this wasn't Austin Powers, after all).

We first need to speak to the elephant in the room - the moment that, I think, caught everybody (including her fictional father) off guard; that is the reveal of Sally Draper in white go-go boots.  Now, the first rule of go-go-boots.com is that we keep our "cool appraising stares" away from the kinder.  We're not interested in sizing up underage girls, even those wearing the most breathtaking boots, but since Sally's boots became something of a phenomenon in the fashion world, I think we can be forgiven for reviewing the two outfits with which she wore the boots.

The character of Megan played by Jessica Paré, despite sporting some of the great mod outfits on the show, rarely wore boots. Here is a unique candid moment 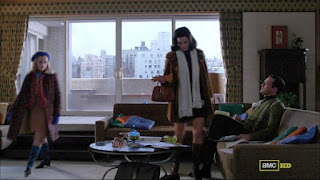 Joan was another other character who only wore boots once as I recall. Hovering at the doorway of an office with a "shoes off" policy, Joan complains to Bert "I'm wearing boots!" And don't we know it!   At another point Joan is shopping for clothes and she tells the salesgirl that she will "take the boots"which presumably are off camera.  Now why didn't we get to see that pair? 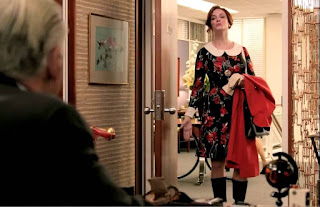 For the most part, other glimpses of boots were on minor office characters passing in the background, but an office worker named Scarlett proves herself to be a bit more prolific in white knee-high go-go boots with multiple outfits. 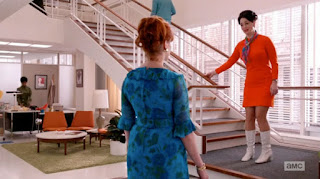 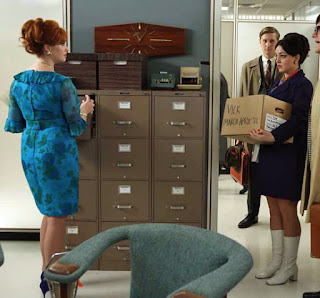 I seem to remember a dalliance between Roger and a go-go booted stewardess, but couldn't find a picture of her.  Here is one that attached herself to Don one evening 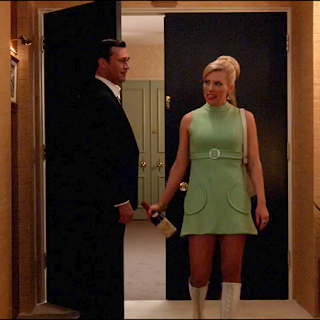 Finally in a moment of crowning glory for the show, Bert who has just died, appears to Don in a "dream" song-and-dance number that features a blonde in white go-go boots.  I'll post a few stills below, but one really needs to see the dancer in motion to get the full effect.  To that end, here is the video. 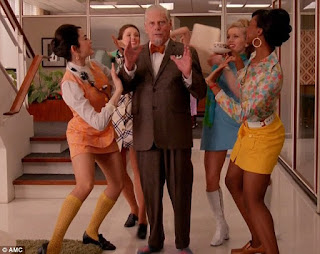 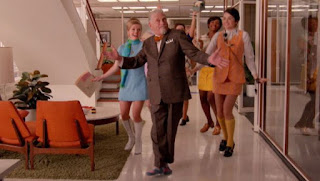 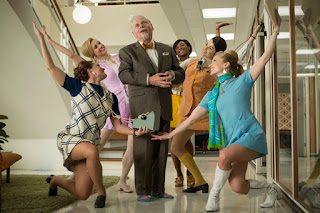 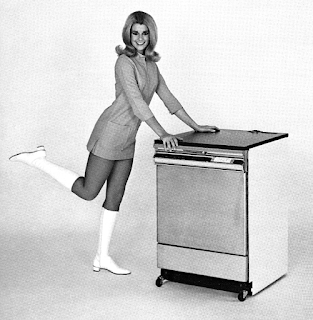 It's been quite a while since I played with the idea of keeping a go-go boots blog and an even longer time since go-go-boots.com had a home on a full-blown custom website.  In the interim I found that I enjoyed posting updates on a Facebook page whenever I would run across something noteworthy to the world of "women's boots and the women who wear them". I especially liked that Facebook had an easy way of managing feedback and allow others to comment and make sidebar posts.  Unfortunately the layout of the Facebook post as a "layout appliance" just isn't flexible enough for my tastes.  I've often wanted to post multiple photos and Facebook posts just don't lend themselves well to that.  When previewing a full length photo of a woman in amazing boots, Facebook is just as likely as not to cut the photo off at the knees, which sort of defeats the purpose.  I thought I had an image appliance solution with Pinterest where you can store multiple photos on a board, set a primary preview image and then link to the board from Facebook with an explanation, but I realized that Pinterest would try to cajole visitors into signing up.  I began to think that a blog would be needed to get the right amount of flexibility without the hassle of running a website.  I'll be able to create posts with multiple photos, change the layout to my heart's content and then link to posts from the Facebook page.

A note about the go-go-boots Yahoo group: Traffic has certainly died down over the past few years, but thank heavens it hasn't degenerated into an utter spam-fest like many Yahoo groups have.  Not to toot my own horn, but I feel like my own lack of participation and oversight has caused interest to wane.  I've done just enough moderation to keep the spam at bay.  I still like topical email lists, so I'd like to see this trend reversed, and now that I have a personal iPhone it is much more convenient to read and respond to personal email.  In fact I now feel genuinely capable of effectively moderating the list if folks still want to use email, but if technology trends overrule me and most posters end up moving to Facebook or some better social media format is suggested/vetted, I will be happy to roll with that.

I hope this blog can be a place where I can effectively and aesthetically manage go-go boot content that I feel compelled to share and then post links to it from Facebook and the Yahoo group.  People who want to share their own content can still use the Yahoo group or the Facebook group and of course, if I love it as much as you do, I reserve the right to steal it for the blog!